For 20 years, Cisco has been changing worlds. Cisco Networking Academy, a Cisco Corporate Social Responsibility program, is an IT skills and career building program available to learning institutions and individuals worldwide. Reaching over 7.8 million students in 190 countries, Cisco Networking Academy is changing careers, education, business and the world.

To attract potential students and increase the volume of enrolments, we launched 2 online campaigns to promote introductory courses that teach skills for the Internet of Things (IoT) and Linux.

Together with Cisco Network Academy, we decided to create a digital ad campaign to reach young people where they spend their time: on Facebook. We developed Facebook link ads featuring engaging photos of young men and women, with messaging such as: “In 2020, 4.5 million developers will work in IoT. Will you be one of them?” And: “Cisco is invested in training the next generation in tech. Join us. Get started today.”

A “Sign Up” call-to-action button clicked through to their website where people could enrol. Ads were created in English and Spanish to extend geographical reach and were shown to people in 190 countries. The ads were also shown to people who had visited the website.

Cisco Networking Academy then took the resulting ad conversion information from its Marketo CRM database and securely passed it to the Facebook platform. They next built a Lookalike Audience based on the characteristics of people who had clicked on an ad and enrolled in an online course, and then also served the Facebook link ads to the lookalike audience.

Thanks to the seamless integration between Marketo and Facebook Advanced Measurement – which measured offline enrolment attribution that occurred on a 3rd party platform – krunch.co and Cisco Network Academy were able to measure enrolment attribution to creative and ads. This helped determine which ads drove the best cost-per-enrolment outcome versus cost-per-click or click through rate to better optimise ad placement and creative. As a result, Cisco Networking Academy not only achieved better cost per registrant, but also a higher total number of registrants.

The results of this campaign – which ran September 28, 2017 to January 31, 2018 – were determined by the advertiser from a 3rd party reporting system, which revealed: 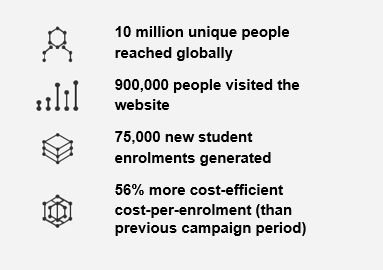 Other Projects. View all

NZNF A Good Boost to save endangered species

Get in touch with our team to discuss how we can help you grow your business.